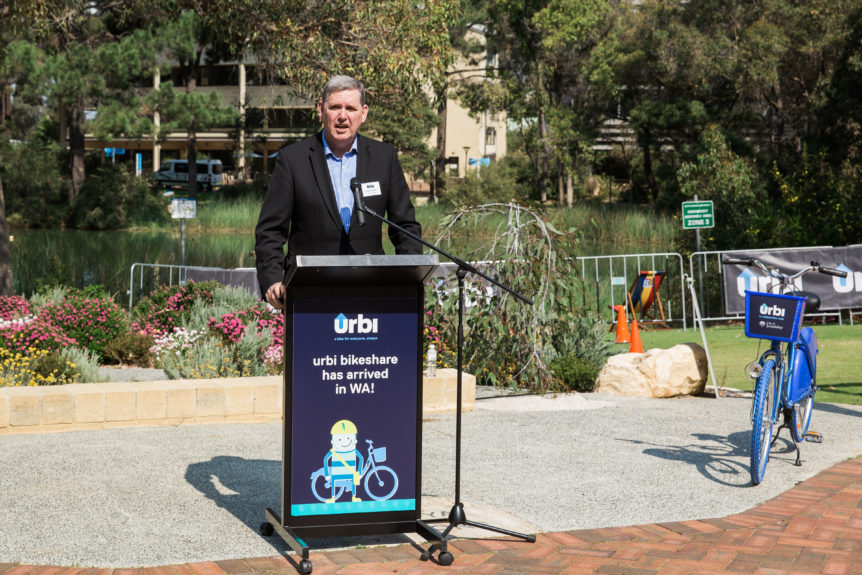 urbi is changing gears thanks to some new appointments.
Ex-Labor MP Ken Travers has been promoted to the role of Chief Biking Officer and former Bicycling Western Australia chief executive officer Jeremey Murray has also come on board.
The appointments are part of a new focus to get more people cycling in Perth.
Mr Travers, who joined urbi earlier this year as Head Domestique, has taken the role previously filled by our owner and founder, Adrian Lee.
Mr Travers is keen to work with governments, councils and other bodies within the community to encourage people to cycle in order to improve health, build communities and reduce congestion.
Now that we have our network up and running we want to take a broader view on riding bikes and the reasons urbi was created.
We want to connect people to the places they want to go and our trial network in Joondalup that we launched in September is the start of this.
With the growth of bike-share across the globe and in other parts of Australia, we are mindful of taking the local conditions into account and creating bike-share networks that reflect the communities they are in and work to provide positive outcomes for the areas we operate in.
In the past Mr Travers spent almost 20 years as an MP, representing the North Metropolitan Region.
His previous experience, including responsibilities for areas such as infrastructure, state development, tourism, transport and sport and recreation will no doubt be of great value.
Having been Bicycling Western Australia’s Chief Executive Officer for six years, Jeremey Murray brings a huge amount of industry relevant knowledge to urbi as our Everyday Biking Officer.
Mr Murray’s role will be to help take us to the next level as the current network of nine bike-stations expands to double that number within the next six months.
In addition to these roles, we have also welcomed Donna Shaw as the Engaging Biking Officer to work with stakeholders and the community.
Former CBO Adrian Lee is staying on as Engineering and Logistics Officer, the change will provide an opportunity for him to focus on the areas he is most passionate about.