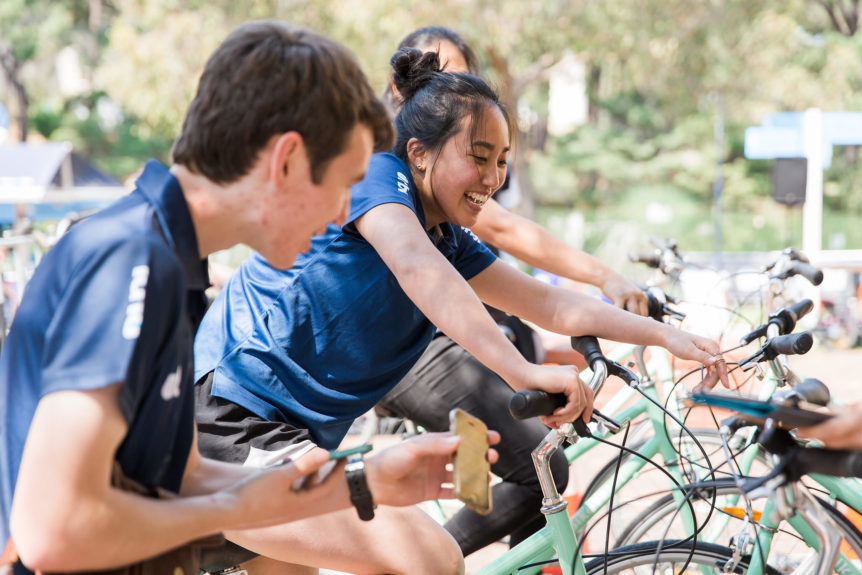 One of the fun activities we like to run at our urbi events is a stationary bike race.
It’s a pretty simple concept and only lasts for 30 seconds so almost anyone can take part.
Onto our stationary bikes we hook a special tracking device.
The device counts how many times the wheel rotates and this gives us a rider’s final distance.
People take part throughout the event and everyone’s distances are recorded with the person who records the longest distance named the eventual winner.
Now, I have to admit, you won’t catch me staring at my reflection in the mirrors at the gym anytime soon and I don’t own any lycra riding gear but I gave the stationary bike race a go at our launch event in Joondalup last month.
I was one of the first to jump on the bikes at the event so didn’t give it too much thought.
I pedalled for about 30 seconds, moving from first into second gear before the timer started to get my legs going and then stepped up the pace for the 30 second race.
At about the 12 second mark my feet came off the pedals, interrupting my momentum and I had to re-steady myself and get back into the rhythm of pedalling.
I finished with a distance of 100 metres.
I hadn’t given much thought to what gear to be in, but had decided not to switch gears while racing because I thought it might interrupt my rhythm.
A fellow urbi team member tells me I should have thought more about my strategy if I wanted a better result.
Strategy?! In a 30 second race!?
He tells me most people go hard right from the start but then run out of puff.
Thirty-seconds is longer than you think when pedalling a stationary bike.
He says the strategy is to use the gears to slowly work up to a steady speed and to hold pace until the last 10 seconds when you should basically go flat out and hope that your lungs and legs don’t fail you.
I guess I’ll have to keep that in mind for next time.

•Think you’ve got a better strategy? How would you go about winning a 30 second stationary bike race?
Let us know on our Facebook page!

At urbi we are keen to see more people riding bikes and enjoying themselves. The stationary bike race is part of our activation program we run with businesses and organisations, get in touch if you’d like to encourage your staff to keep active and pit them against each other in a stationary bike race via info@urbibike.com.au